From the October 2002 issue of AGD Impact

Medicaid programs across the country are failing to meet the oral health needs of low-income children, according to the Academy of General Dentistry (AGD). In written testimony submitted to the first-ever Senate Health, Education, Labor and Pensions (HELP) Committee hearing on children's oral health, held by the Sub-committee on Public Health in June, the AGD reported that as many as one-third of all eligible children are not enrolled in Medicaid's Early and Periodic Screening, Diagnostic and Treatment (EPSDT) program or the State's Children Health Insurance Program (SCHIP).

The AGD uncovered statistics that may point to a failure of Medicaid to provide adequate dental care to underserved children.

According to annual EPSDT performance reports submitted to the Centers for Medicare & Medicaid Services (CMS) by each state, only 24 percent of Medicaid-eligible children received dental services of any kind in 1999. Maryland was found to have the worst record in the United States, with as few as 7 percent of eligible children participating in EPSDT-covered dental services.

According to unpublished figures provided to the AGD, the percentages improved slightly in 2000, with 25 percent of national Medicaid-eligible children getting dental care. According to written AGD testimony, "states must assure the availability and accessibility of required health care providers and resources and help Medicaid beneficiaries effectively use these services."

The dental profession for years has pointed to problems with the Medicaid system that make it prohibitive for dentists and indigent populations to cross paths. The problem dentists most complain about is Medicaid's low reimbursement rates.

With increased program expenditures expected to increase this year while state revenues, on average, plummet, reimbursement levels also are expected to freeze or lower. "[If reimbursement rates worsen] the already low participation of dentists in the Medicaid program is sure to further decrease" as was stated in the AGD's written testimony. According to the Centers for Disease Control and Prevention, in 2001, only 32.3 percent of dentists participated in Medicaid.

Under the EPSDT program, dental assessments, preventative care, restorative services, medically necessary orthodontic care and emergency care are mandatory benefits for children ages 0 to 21. Additionally, the program is required to cover any medically necessary follow-up care regardless of whether the treatment required is a normally covered benefit.

The AGD and other national dental organizations are supporting the Children's Dental Health Improvement Act of 2001, which was sponsored by Sen. Jeff Bingaman (D-N.M.).

The legislation would provide:

The AGD noted the need for improved oral health literacy, stating: "Research shows that those with limited/low literacy skills have poorer overall health; are less likely to make use of screening; present in later stages of disease; are more likely to be hospitalized; make greater use of health services; have poor understanding of treatment; and have lower adherence to medical regimens. Health economists estimate that this problem costs health systems $73 billion annually." 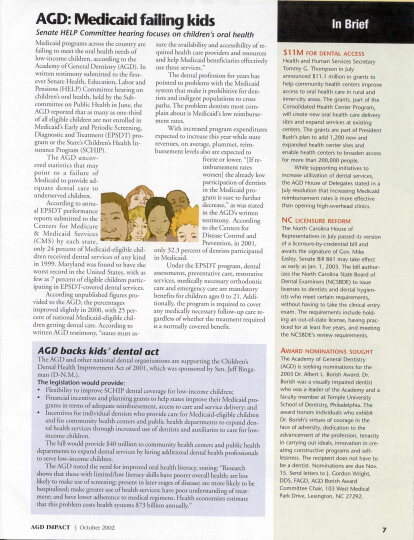