Every morning, Dr. John Reese steps into his dental office, starts the engine and drives it to the school where he'll be working that day.

The Rock Hill dentist said the idea of his nontraditional practice setting came after he attended a conference early last year. What he didn't know was that he'd have to design the 29-foot clinic on wheels himself.

"I was at a meeting back in January of 2001 and we were discussing access to care issues for children ... who weren't getting seen by the dentist," Reese said. "I kind of got the idea that we could bring the mountain to Mohammed, so to speak."

So Reese got on the phone to state dental organizations, school officials and public health agencies. He bought a recreational vehicle and had it retrofitted with dental equipment. By March 30, 2001, he'd begun a pilot program to provide services to students at Sylvia Circle Elementary.

"One reason children go to the school nurse is because of dental problems. But it's also the biggest source of frustration for the school nurses, because that's one of the few things that they can't help the child with," Reese said. "Then they are frustrated because they have a hard time finding a dentist who can see the child or who will see the child. By providing a clinic that comes to the schools, we eliminated all those problems."

Among those students being helped are those on Medicaid, a government-funded program that offers health care services to people with the low incomes.

According to 2000 statistics from the Department of Social Services, about 60 percent of S.C. children on Medicaid were not receiving any kind of dental care. The need was overwhelming, and Reese had found a solution by going mobile.

But he wasn't entirely happy with the converted RV. It was functional, but didn't quite fit his needs. "I needed to change it, so I looked around but couldn't find anyone who could build one or had one like I wanted," Reese said. "So I designed it myself and had a company in Indiana build it for me."

The result is the vehicle Reese uses today. It contains two work stations and all the equipment commonly found in a dental office, including X-ray machines. He has a national exclusive on the design and envisions his idea taking off as a sort of "dental practice in a box."

"I'm looking to have independent contractors working under my company name, Dental Access Carolina, to work in other school districts in the state," Reese said.

A dentist has already signed on to work with Reese this week. Reese said all that new dentist will have to do is hire an assistant and a hygienist.

"The van is fully equipped. She'll have supplies, instruments, equipment, computer hardware, software, technical support, billing and payroll services," Reese said. "And she'll get patients. ... All she'll have to do is find two employees to work for her."

A 1996 publication by the American Dental Association indicates that mobile dentistry has been around for several years, although less than 2 percent of dental patients received care from mobile clinics.

The report cited advantages of dental care on wheels, including the wide range of services possible and ease of setup. Among the disadvantages: cost. The report called mobile clinics "expensive to buy and maintain."

Reese said his mobile dentistry unit cost "under $200,000, considerably less than a private office." He hopes the rolling office can solve two of the major frustrations for an industry that is underserving school-age Medicaid patients: "No. 1, we're dealing with a segment of the population that is not being seen. No. 2, we've gotten the overhead in line so that the doctors can do a good service and enjoy a reasonable standard of living."

(COURTESY OF THE CHARLOTTE OBSERVER - https://www.charlotte.com) 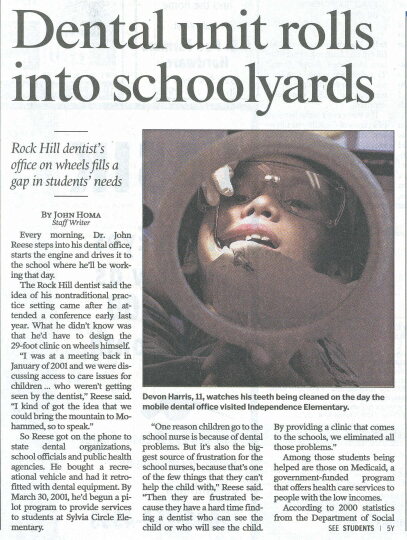