Getting to the Root of the Problem

COURTESY OF THE HERALD ONLINE - http://www.heraldonline.com

Dentist drives clinic to schools to treat kids who might be missed.

The vehicle is equipped with two work stations, a restroom and a sterilization area. The mobile service provides students who are on Medicaid and unable to go to the dentist the opportunity to receive professional dental care. Medicaid is a federal insurance program for low-income families.

On Monday, Reese's 29-foot dental office on wheels sat at the school's front door ready to welcome about 16 students. Many of his patients had never visited a dentist.

Kindergartner DonRabia Judge was Reese's first client of the day. As she boarded the mobile unit, she smiled, saying she was not afraid of the dentist.

Not only is Reese able to perform examinations and cleanings, but he also handles X-rays, fillings and extractions in the mobile dental unit.

It has been more than a year since Reese began delivering his services to schools. He thought of the idea during a January 2001 dental association meeting. There, he learned how hard it is for Medicaid patients to get good dental care -- because of a lack of dentists accepting Medicaid patients and the difficulty Medicaid patients have getting to the dentist.

From that discussion, Reese, 40, began wondering whether the services could be brought to Medicaid recipients at school.

"I'm not foolish enough to believe that we will meet all of the needs, but we will put a dent in it," Reese said.

The program's benefits to the school district have been rewarding, said Rock Hill Superintendent Randy Bridges.

Bridges said he invited Reese to his office to share more information with him about the program.

"I've never seen anything like it," he said. "I was fascinated when I heard of the program. He is providing a service to our children."

After getting the necessary approvals, Reese, who has been practicing for 14 years, was able to leave behind his practice, located at Suite A at 219 Oakland Ave. in September 2001, for the mobile unit.

In order for Reese to provide dental care to students, parents have to give consent.

One of his first stops in his new mobile clinic was in Clover. Pat Ballard, the Clover school district's Nurse, said Reese began seeing seventh- and eighth-graders who are Medicaid recipients at Clover Junior High School in February. Ballard said Reese now visits second-, third- and fourth-graders at Kinard Elementary School and fifth- and sixth-graders at Clover Middle School.

"It's been working wonderful," Ballard said. "We have a lot of students that don't see a dentist. This serves as a routine purpose in trying to catch something before it becomes major."

Since Reese's workload is expanding, he is looking to contract with independent dentists to continue providing other students the needed services.

"This is probably one of the best things that I have ever done," Reese said. "We're blazing new trails."

For more information about Reese and his mobile dental clinic, call 803-324-3101 or visit www.dentalaccesscarolina.com. 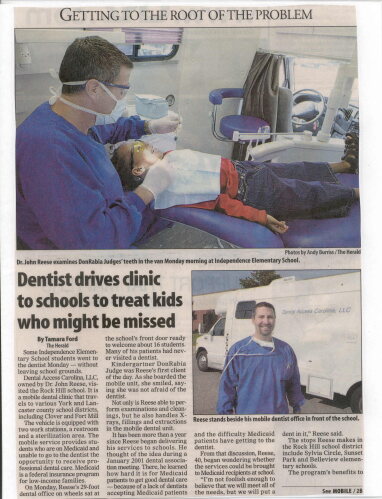